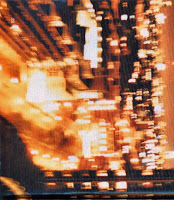 Nearly two thirds of Mankind from Bangkok to Reykjavik live under the luminous glow that girds cities and suburbs.With more and more countries industrialising and urbania exploding we cannot be oblivious to hazards that have encroached upon our horizons.In several cities it no longer gets dark.It's not quite possible to see the full resplendescence of the night sky as a result with as much as fifteen percent of the world's population having lost their night vision.This unnatural glow of billions of street lamps,office lights,signs,billboards,searchlights,security lights could be making us all sick:
* Common levels of fluorescent lighting in offices can elevate blood pressure.Lengthy daily exposure leads to a flagging off of sexual performance , increased stress , make us more prone to errors and a rising risk of cancer,especially breast due to a suppression of the nocturnal production of melatonin ( produced in the brain's pineal gland only when the eyes signal it is dark ), loss of night vision and sharp increases in anxiety.

* When a sports stadium lit up for night time games,frogs stopped courting.If you reduce the number of nights frogs,turtles and other life kinds breed year on year it'll lead to a severe decline in the population of the species and as a consequence with a domino effect on the eco system.Birds have used the moon and the stars for navigation during their annual migrations. But with the loss of night mayhem has broken upon the habitats , proliferation and behaviour of nocturnal creatures.