Once upon a time in China , a farmer who had gotten on in age, began to be perturbed and riled by the feasting and pleasure-seekings of his three sons. He had toiled himself to dry marrow to build up this farm business. One night while starring up into the skies an idea rode in into his mind.

The next morning he called his sons and said: 'Sons, I 'm gone - I might die any day now.This farm is here for you guys but it's hard work. Look at me , a scarecrow of bones. But never mind all that. There's a secret . I need to tell you this before it's too late. I heard from your grandfather that...that.. there's huge treasure buried beneath our farmlands.....' hardly had he wanted to say the rest when.. when his sons.. just VANISHED !  As the farmer peered out the window , he saw the eldest son and his two brothers running to the nether ends of the farm with hoes and spades in their hands.

They began digging , turning the clods and soil over but careful not to harm the fruit trees and crops just budding.They dug and dug, day after day. The rains came. But they kept on at the digging . Soon it was all over. Dig they did with all the arms and energies they had. But there was no treasure found.

One evening as they sat down , eyes met eyes.They looked at each other in askance.Perhaps the crafty , wily old fox had had them ?

But, meanwhile, the rains and turning over of the soils brought one thing - a bumper crop and piles of cash.They realised then , that hard work and perseverance were all the hidden treasure their genius of an old man had fooled them into learning and meant !

How An Iowa Farmer BEAT Drought ... 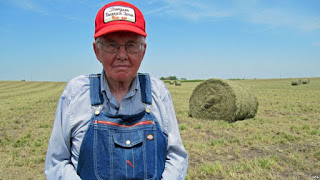 BOONE, Iowa — Unlike most of his Iowa neighbors, farmer Dick Thompson isn't expecting the US government to help him survive the drought.While others depend upon federally subsidized crop insurance, Thompson relies on old-fashioned farming methods to see him through.

He went for crop diversity, something lacking on many Iowa farms today. Corn and soybeans carpet the Iowa landscape. Many farmers grow nothing else. And when those crops do poorly, payments from crop insurance keep farmers in business. Instead of crop insurance, Thompson protects himself the old-fashioned way. While he grows corn and soybeans, he also raises hay and oats, along with cattle and hogs. His oat crop was harvested before the drought hit. His third crop of hay sits scattered in round, shoulder-high bales on what will be next year’s corn field. "I think it's common sense," Thompson says. "You've got diversity and you've got some protection there. If one crop doesn't do well, maybe the other one will make up for the difference."

Thompson did not sell off his herds because his cows and hogs were good for more than income. They also provided the manure to fertilize the soil, eliminating the need for chemical fertilizers.

Read the rest of the story below.....