Charge Of The Angry Chickens

Not very long ago in an Asian nation the price of poultry in the marketplace fell off the cliff and whole chickens could be bought for the price of a cuppa.The farmers fell into delirium and worn out by the government’s snail attitude towards their plight  decided to strike their grief home .


﻿
They loaded their lorries with chickens of every  hue and size and drove them to Parliament’s doors unbeknown to anyone but themselves. Meanwhile on that day ,in Parliament as the lawmakers sat down to sip their coffees and munch on their pastries like they did every other day , there came sounds of what sounded like cackling  at the doors. The cackling  grew  louder  and  louder and suddenly thousands of chicks came down the hallways and into the meeting chambers. For a tense moment the lawmakers stared and gawked at the chickens that 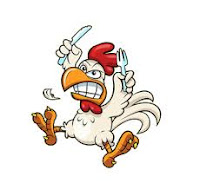 blitzkreiged into their sanctum before hell broke loose. The hungry chickens, starved  for this moment and day , flew upon and clawed onto tables and the panic impaled lawmakers. They chased some down alleys , seized upon them from the air , jumped atop desks and started chomping on the sandwiches , cookies and whatever. As the pandemonium increased in crescendo cups and mugs went flying. As the fowls went about their tasks, the smell of chicken  excrement  filled ﻿ Parliament House’s air. Cries of anguish , screams of terror got drowned under by the hoots and chuckles of the cackling , gleeful chickens.

While the fowls indulged in an eating and clawing orgy the nation’s eyes [live telecasts of proceedings]were turned to watch the carnage. Never before had they seen such clowning and anguish and dement upon the faces of their lawmakers. A scene that stood out was the battle atop the Speaker’s table. A cockerel flew at him [call it chemistry],clawed his paling cheeks and as his spectacles fell to the floor , the cockerel clambered atop his head and egested. He never for once thought nor the constituents imagined that he could run as fast as he did that day , fleeing past doors like the Flash.


When it was all over men and women lay sprawled and prostrate everywhere. The chickens lay, some standing, panting too as ambulances fled with screaming sirens towards hospitals. Troops from nearby bases rushed in, to quell the coup d’etat of  the chickens .


Though we can’t resort to do this but one thing we all know from experience is that , that’s what can happen to us emotionally when we ‘re pushed towards financial cliffs  or / and when our financial trees wither or are uprooted or get burnt.